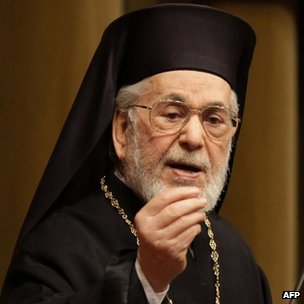 Patriarch Ignatius was born in 1920 in the village of Murhada, near the city of Hama
Continue reading the main story

The Greek Orthodox patriarch of Syria, Ignatius IV (Hazim), has died in neighbouring Lebanon at the age of 92.

His remains would be brought from Lebanon to Syria for burial, it added.

Ignatius had led the Greek Orthodox Patriarchate of Antioch and All The East, the largest Arab Christian Church in the Middle East, since 1979.

There are believed to be about a million members, the majority of whom are Syrians.

The Church is one of 14 autocephalous (ecclesiastically independent) Eastern Orthodox patriarchates, third in honorific rank after the churches of Constantinople and Alexandria.

Since the 14th Century, the patriarch has resided in Damascus.

Patriarch Ignatius was born in 1920 in the village of Murhada, near Hama.

In 1961, he was ordained Bishop of Palmyra, in central Syria. Nine years later, he became Metropolitan of Latakia, on the Mediterranean coast.

Syria's minority Christian community has not joined the revolt against President Bashar al-Assad. Many Christians are fearful for their future if the country's majority Sunni Muslim community chooses an Islamist leadership to replace decades of secular rule.

of religious, political, and community leaders in The Vatican on November 24, 2012 to celebrate

the elevation of six new Cardinals to the College of Cardinals at St. Peter's Basilica, including

This was followed by an official dinner hosted by

Michel Suleiman. Many members of the governmental, political, and religious organizations

attended, where His Eminence was presented with the highest Lebanese honorarium. There were

other functions in The Vatican and Rome in honor of His Eminence Patriarch Rai.

Dr. Dass, in his role as President of the American Middle East Christians Congress, had a

meeting with His Eminence Patriarch Rai and members of his entourage, and had many bilateral

meetings with political, religious, and community leaders who accompanied His Eminence and

who were present from all over the world to attend this celebration. We also took advantage of

Congress and its activities to the Holy Father Pope Benedict XVI's office, The Vatican Cardinal

Louis Tauran, and many other faith-based and community-based organizations in Rome, Italy.

The elevation of Patriarch Rai is a pride, joy, and honor not only to the Maronite Christians, but

to all the Middle East Christians. It is an extra distinction to His Eminence Patriarch Rai for the

role he has played and will be playing toward the Middle East Christians, Maronites, and

Christians, especially with all the new political, religious, and geographical changes throughout

the Middle East and Arab world. We believe these two prominent Christian leaders, along with

the other leaders in other denominations, will be playing a very positive role to preserve

Christianity and Christians in the Middle East and abroad.

organizations to bring harmony, peace, prosperity, civic and civil rights to all the inhabitants of

the Middle East and Arab world, where all should be treated equally with freedom of religion,

Christianity and Christians in the Middle East and abroad.

Pope elevates Rai and 5 other cardinals By Nicole Winfield

VATICAN CITY: Lebanon’s Beshara Rai is among six new cardinals who joined the elite club of churchmen who will elect the next pope Saturday, bringing a more geographically diverse mix into the European-dominated College of Cardinals.

Pope Benedict XVI presided over the ceremony Saturday in St. Peter's Basilica to formally elevate the six men, who hail from Colombia, India, Nigeria, the Philippines and the United States as well as Lebanon. As Benedict read each name aloud in Latin, applause and cheers erupted from the pews.

In explaining his choices for this "little consistory," Benedict said he was essentially completing his last cardinal-making ceremony held in February, when he elevated 22 cardinals, the vast majority of them European archbishops and Vatican bureaucrats.

The six new cardinals "show that the church is the church of all peoples and speaks in all languages," Benedict said last month. "It's not the church of one continent, but a universal church."

That said, the College of Cardinals remains heavily European even with the new additions: Of the 120 cardinals under age 80 and thus eligible to vote in a conclave to elect a new pope, more than half - 62 - are European. Critics have complained that the College of Cardinals no longer represents the church, since Catholicism is growing in Asia and Africa but is in crisis in much of Europe.

With the new additions, the College of Cardinals is a tad more multinational: Latin America, which boasts half of the world's Catholics, now has 21 voting-age cardinals; North America, 14; Africa, 11; Asia, 11; and Oceana, one.

Among the six new cardinals is Archbishop James Harvey, the American prefect of the papal household. As prefect, Harvey was the direct superior of the pope's former butler, Paolo Gabriele, who is serving an 18 month prison sentence in a Vatican jail for stealing the pope's private papers and leaking them to a reporter in the greatest Vatican security breach in modern times.

The Vatican spokesman has denied Harvey, 63, is leaving because of the scandal. But on the day the pope announced Harvey would be made cardinal, he also said he would leave the Vatican to take up duties as the archpriest of one of the Vatican's four Roman basilicas. Such a face-saving promotion-removal is not an uncommon Vatican personnel move.

Harvey's departure has led to much speculation about who would replace him in the delicate job of organizing the pope's daily schedule and arranging audiences.

Cardinals serve as the pope's closest advisers, but their main task is to elect a new pope.

The six new cardinals are all under age 80. Their nominations bring the number of voting-age cardinals to 120, 67 of whom were named by Benedict, all but ensuring that his successor will be chosen from a group of like-minded prelates.

Saturday's consistory marks the first time in decades that not a single European or Italian has been made a cardinal - a statistic that has not gone unnoticed in Italy. Italy still has the lions' share of cardinals, though, with 28 voting-age "princes" of the church.

Sunday as the new head of Egypt's Copts in an

\amid rising fears about the community in a country

Dozens of Coptic Christian clerics in flowing robes took part in the four-hour ceremony, the first

in four decades, as the cathedral bells tolled.

Tawadros received the ornate crown and crucifix from Bishop Pachomius, who had served as the

Arabic, English and Greek mingled with the ancient Coptic language of the church's liturgy in

the psalms and prayers of the service and the tributes of well-wishers.

Tawadros, 60, was chosen on November 4 to succeed Pope Shenuda III, who died in March. He

was chosen after a blindfolded altar boy picked his name from a chalice, according to church

a line dating back to the origins of Christianity and to Saint Mark, the apostle and author of one

of the four Gospels, who brought the new faith to Egypt.

Shenuda, a careful, pragmatic patriarch, died at a critical time for the increasingly beleaguered

minority, which has faced a surge in sectarian attacks after an uprising overthrew president

Hosni Mubarak in February 2011 and saw Islamists rise to power.

six and 10 percent of an 83-million population.

In Rome, Pope Benedict XVI urged Tawadros to strengthen relations between the Catholic and

enthronement," Benedict said in a message sent to Tawadros.

continue to grow closer, not only in a fraternal spirit of collaboration, but also through a

Amid increased fears about the community's future after the overthrow of Mubarak, Tawadros

be a president "for all Egyptians".

Copts have suffered sectarian attacks for years, but since Mubarak's ouster dozens have been

Tawadros "seems like a wise man. God chose him at a good time because we need a person like

him in the face of the Muslim Brotherhood," said Coptic dentist Jihan Refaat.

"We need someone strong to solve all the problems of the Copts at the moment," said Antwan

Morsi sent Prime Minister Hisham Qandil to the ceremony as his representative. The church had

initially said Morsi himself would attend, but then said he would be absent as he dealt with the

his efforts to achieve unity for the Egyptian people".

Tawadros's official biography stresses his wish for good relations with Muslims, saying he has

warned that a draft constitution would be unacceptable if it enshrined a "religious state".

Under Mubarak, the constitution vaguely stipulated that the main source of legislation were

principles of Islamic law. The draft charter is set to clarify that article with a stricter

Tawadros also advocates further unity between Egypt's Copts and those of the diaspora, whose

leaders have often been more outspoken against abuses suffered by the Christians in Egypt.

On behalf of the American Middle East Christians Congress, we would like to join the Lebanese

recognizes you as the important Middle East Christian leader now in the Middle East and abroad,

affecting Christians and Christianity in the Middle East and in diaspora.

of the Middle East Christians.

My prayers and best wishes for your success in your leadership, not only to Lebanon, but to the

Middle East Christians and to humanity at large.